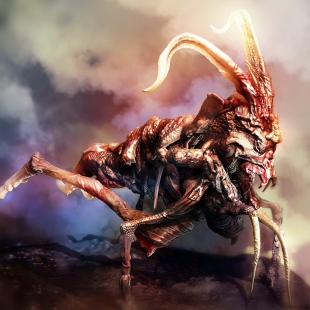 I had escaped my dimensional experimentor’s captivity through that stupid accident that could’ve well ended my existence, but instead set me free. But I did not know what to do with my new-found freedom. The huge alien distorted manifold castle I was in had endless corridors mirroring backward into endless rooms each more strange than the previous. In one such room I found a long rotten corpse that looked almost humanoid as it was sitting on a surprisingly well maintained luxury soft leather couch, with some kind strange helmet on. In an unexplainable morbid curiosity I put it on, and I was instantly transported to something that I strangely knew to be one of the orbiting moon’s volcanic crater… which to my surprise seemed still active and steaming, and teaming with strange extraterrestrial insectoid life. It seamed to mean me no harm, but instead of safety, the sight of their hive mind-collective filled me with an overwhelming feeling of celestial loneliness mixed with fascination.