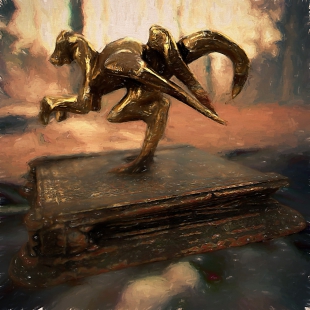 Having spent the last 9 years of his life and a considerable portion of his family fortune searching for “The last book of mysteries” the Honorable Count Iyoakhi Radanael Vlariki was understandably pleased when it was unexpectedly delivered to him on this snowy day of delayed spring. His excitement took a turn into depression though when he realized that far from being the old frail paper bound tome that he was expecting he received a metallic block which indeed matched the descriptions… but it was… ahem… made out of metal! Was this some kind of cruel joke of fate? How was he to open it? Melted into it’s top was also a golden figurine. He had of course read about the horrible guardian.. but this was ridiculous! Vlariki spent the night staring at it every which way, half crying in desperation, not helped much even by the strong alcohol he kept drinking. And thus sunrise came upon him, and as the first rays of the sun intruded through the window they hit the guardian figurine. That’s when at first when he thought he perceived a slight movement, but naturally he ascribed it to his drunkenness, but then he started to hear a distinctly growing and threatening hissing sound as the guardian began to move, at first slowly but then showing great and restless agility.
————————————————————–