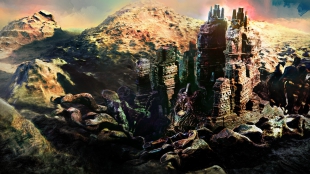 The legends say Narra-Ku’thm used to be the capital of an ancient forgotten empire, but then they became so decadent that the Gods of Light abandoned it, and the Shadow Deities took an interest. The inhabitants built a great temple to honor their great hunger for passion and life, which lead to a renewed bloom of their empire, until one frightful day the whole city was swallowed by the vengeful earth. This is where the legends end and well documented history steps in, because 3 centuries ago this ancient metropolis has risen again as a moving city, only partially devoid of life, carried by a frightening great tentacular mass from the depths, and in constant motion. Not fast motion, mind you, to a casual observer it looks just like an old ruin, for it moves just a few meters per year, not enough to notice with the naked eye, but enough to frighten all who ever visited it with the implications that this entails. A few end-of-days cults moved into it immediately, along with the adventurous and extravagant, and even the old temple started to see a resurgence of the old rituals. But nothing happened. In a few years caravans of goods and trade started to include it in their routes yet again. Who knows, maybe in a few more centuries of uneventful strangeness all will be forgotten, and in that behavior so typical of the short lived humans this city will pulse again with great crowds of people spreading out and conquering the world from their moving fortress.